A happy New Year to everyone!

2015 is going to be a busy one for myself as I have plans to release not one but three novels!

The one that I am revealing today is the second book in the Sundered Crown Saga. Its a story that I hope will be bigger, better and just as successful as the first has been ;). I initially planned to call it War for the Sundered Crown, but as I planned out the story-line I chose to change it.

If you have read Heir to the Sundered Crown you will likely recognise the name Asphodel, as it is a sword wielded by champions and heroes throughout the ages. Seeing as how book two will focus on the quest to find it I decided to name the whole book Asphodel.

Here’s the blurb, (likely to change)

‘Asphodel, Sword of righteousness I cast thee from the grasp of mortals for no man should wield thy power’- The Champion Alectae following the murder of King Marcus the Mighty, conqueror of the Golden Empire.

‘Five years has passed since the Battle of Eclin and the crowning of King Alderlade but the Kingdom of Delfinnia remains divided and dark forces are circling waiting for their chance to strike. Only one thing can save the realm, the legendary sword Asphodel. Luxon Edioz is now a wizard, the first of his kind in over a century and his powers grow by the day. Unfortunately for him and his mage friends hatred against magic wielders is reaching breaking point.

Lynchings, executions and persecution have become common place as the scared people turn on those magically gifted. The mages are blamed for all of the Kingdom’s ills and the machinations of the scheming Baron of Champia have made matters worse. With enemies closing in from all sides Luxon and his allies are sent on a secret mission to the city of Stormglade located far to the southwest.

What they find in the city will plunge the realm into war and send Luxon on a quest to find Asphodel, before all is lost.’

And here is the cover, once again designed and created solely for the book by Phil Barnes http://philb0883.deviantart.com/ 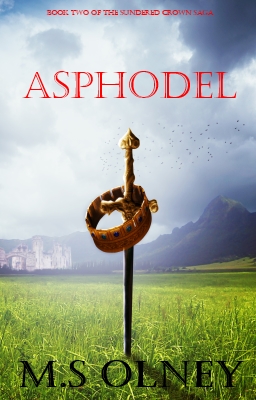